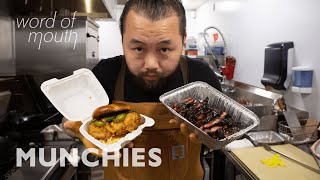 -A lot of the recipesthat I came up with, they were reallyjust crazy experiments. I just cookwhat I like to eat: a lot of fried chicken,a lot of barbecue. I wasn't trying to starta business just off Instagram. It was an accidental,I guess, success. My family members are likewhy are you frying this big giantsalt-and-pepper chicken? They're supposedto be in pieces.

I want to help evolveChinese American food. My name is Henry Cai. I'm the owner of3 Little Pigs Chi. Based in Chicago,at Humboldt Park, my restaurant, it has a lotof different categories. It's barbecue,Chinese restaurant mainly, and fried chicken.So this is all it is. I know it's not much but thisis where the magic happens. This space is about200 square feet.

It's technicallyjust a kitchen but, you know,it is what it is right now. It's a challenge, you know,but we made it work. The main top sellers are thesalt-and-pepper chicken sandwich and the 3LP fried riceand the barbecued pork. So we're going to besmoking the pork now. It's been marinated witha lot of different spices. How I do itis I try to hit it like maybe like a coupleof inches before the end,.

And then you justhang it like this. I know it doesn't look muchbut people come in here for this magic.As far as barbecue pork, there's different types of cutsthat a lot of people use. Some people use shoulders,some people use butts. I use butt just becauseit's fattier and I just thinkit's a better cut, personally. I want to stay humblebut a lot of people have compared itto the char siu in Hong Kong,.

And that's, you know,probably my biggest compliment. I'm speechless when peoplesay stuff like that. Like that's like hittinga Michelin type. The space that 3 Little Pigs Chi is in is in a shared kitchencalled Humboldt Park Eatery. For 3Little Pigs Chi, likeit's mainly pickup only. There's no dine-in. You couldorder through my website or you could just directmessage me on Instagram.

That's the old-school way.I still welcome that. You know, like I wantpeople to chat with me. Like five, 10 years from now, I still hope to maintainthat relationship with old customersand new customers. And there's a lot of, you know,going back and forth but you have to do that nowjust to keep that, you know, relationship with your customer. And, you know, I don't wantanything to change for that.

-Thank you, my man.-You got to work today? -Yeah. I'm off to work. -Okay.Where's your Celtics stuff? -Oh, it's Red Sox right now –Celtics tomorrow. -I trust my customersand they do find it weird sometimeswhen they come pick up the food and I'll tell them likeI'll send you my Zelle later. That's the kind of style I want,that whole mom-and-pop thing. Like if you don't havethe money today, you know,.

Just pay me next week. You're going into a placewith no signs, nothing, and then just a random guycomes out and brings your food. I think that mysteriousnessdoes lure people in. Outside of this building,it's just a long warehouse. It's just an industrial area. There's not a lotof foot traffic, as you can see. If people are coming here, they know thatthey want to be here.

So it's kind of like –I don't want to say a hidden gem but like a secret placeto order food. That's what a lotof people perceive it as. I think the craze is really from just a lot of food blogsranking my food. I've had people like take a busfor an hour from the suburbs just to try a chicken sandwich. I've had peoplefrom different states that have flown to try the food.This guy likes to ride his bike.

It has a TV or a tablet,and he put my logo in there because he's justsuch a big fan. Social media was probablythe number one thing that got me to where I am today. I didn't have a restaurantat the time, so I didn't havefoot traffic coming in. So everything was word-of-mouth.To be honest, it was all word-of-mouthfrom the beginning. Like that's how I gotto the food bloggers.

I've been doing thisfor a while, just making sure that, you know, the customers have that personalcustomization, you know? Like people just like havingtheir name written down. Usually, people just, you know,just put it through it, but I mean, since the bagsare where the orders are, that's just how it is. I personally don't haveany culinary experience. I'd never worked at a restaurant.

And staying trueto our ancestors, our roots. This food represents us,you know, because we eat American food.We eat Chinese food. We eat Mexican food.We eat all kinds of food and then I just wantto put it all together. So I was born here in Chicago,grew up in Chinatown. But you know, during my summers, I would spend my timein Hong Kong. So I grew up in a ChineseCantonese-speaking household.

Both of my parentsdon't speak any English at all. So my father, he was a chef,and my mom worked at a bakery. Food was just,you know, all around. Chinese chefs, they don'tget home 'til like midnight because they have to clean,they have to finish everything. So I would stay up and waitfor my dad to bring his dinner so I would takea couple of bites. It made me fall in lovewith the whole industry. -My dad, like he's justlike master of everything.

Like he can do Chinese barbecue.He knows how to do dim sum. I feel like,with Chinese parents, they, you know,they bring you a lot of food. They cut your food and they buyyou a lot of snacks and food. And that's how they showthey care. -So I learned howto cook from my dad. He always told me that,you know, you should alwayspick up a craft. So I picked food.I love to eat, obviously.

I learned to love to cook too. This marinade recipe is passedon by different generations. So I learned this recipefrom my father and he learned itfrom other people before him. It's tough immigratingto a whole foreign country where you don't speakthe language. So you have to workyour ass off. You have to do anything possibleto survive, you know? And I just don't wanthis legacy to go to waste.

And I'm just carrying this on.So, you know, when he's gone, you know,he could live through this. For the future of 3 Little Pigs, I do want to havea brick-and-mortar. I don't want to sayI'm successful but I want to say that I'm proudof what I've done. I've created relationshipsand I've had great feedback from peoplethat I've served food to. That to me is a ray of success.

I think in this two-year journeythere's a surprise every day. The amount of supportI've gotten, the media coverage I've gotten, I don't even knowhow to explain it. But I'm pretty proudof what we've gotten to today.