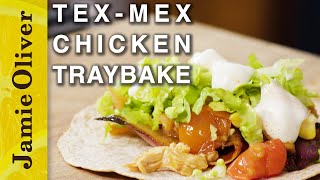 Hey guys, hope you're well. So I'm going toshow you a really nice, easy dish that's delicious.It's a traybaked chicken dish that we're going to have with tortillas and salad and a littlebit of corn in there, it's going to be delicious. It's a family favourite dishwhich all happens in one tray. So what we're gonna do iskind of have a welcoming party of flavour. How we're gonna do it? We're gonna have alittle bit of olive oil in there and then about the same of red wine vinegar and thenwe'll kiss it with alittle bit of salt and pepper and thenwe've got the flavour that I love. About a teaspoon of smoked paprika goes in, that iswhat's gonna flavour this dish. Put the tray.

Forward, we're gonna go in with two peeledonions that I'm just gonna quarter and see these little petals like that, just pull themoff and they'll just be beautiful by the time the chicken's cooked. And then we've got thechicken. Now chicken thighs are just a brilliant cut of meat. They're so juicy and tender.So I'm gonna put the chicken in here like that and then I'm gonna use my hands. Justgive it a nice little massage up. Place the chicken on top of the onions andwhen they cook together it's gonna be the most beautiful harmony. And then last butnot least in this tray, cherry tomatoes, OK. I'm gonna put a pack of these cherry tomatoesin, that's basically 250g and imagine all of this cooking, right. It goes in the oven.I'm just gonna wash my hands.

OK, I'm going to put this straight in theoven and we'll cook it for 45 minutes at 200°C Now let's just talk about tortillas. A reallygood swap that is more delicious and definitely much more nutritious is to go from the whitetortilla to the wholemeal tortilla Two or three times more fibre but also more flavour.So I'll show you how to prep the tortillas a little bit later. But first up what I wantto do is show you a technique of cooking the beautiful sweetcorn. So you can do these ona barbecue, lovely and you'll get that smokiness, but another way to kind of get a similar charis to go into a pan, dry, and just char it and turn it around. So we'regoing to cook this for like 10-12 minutes on a medium-high heat. You can see that charringthat you get, really nice. Just keep rotating.

That corn and, once it's all charred up likethat, it's going to be amazing So the chicken's had its time, the corn is getting nice andcharred up, let's talk about the crunchy bits, salad. So you can have fun with any saladyou've got, but I've got the humble gem lettuce here. You can just have kind of big chunksif you want or you can finely slice it just so it's nice and delicate and really fine.So we've got our salad bit here, we could take this corn in the cob and just have itwhole as we always do, or you can take it whole and just halve it. Be careful though,cut it in half. But what my ones love is when you take it off of the core and you just putit on the fat bit like that, take a knife, don't put pressure on it and just run it gentlydown the corn like that and you can see how.

Hot and steamy that is. So look, that'll goover there Now next up, with the tortilla we just want to warm them through. Literallyon one side actually Get yourself a nice little clean tea towel and just place it here likethat. I don't want to get them crispy, I just want to reheat them, so two at a time. Everytime you put the tortillas in just wrap them up like this, OK. So that will keep it niceand warm and steamy, but, most importantly, flexible. So you can wrap it up and it willbe gorgeous. So look, the last two done in your little tea towel here. And then here,the traybake and the thing that I love about traybakesis that, everything cooking together. The smokiness,thesweetness, I can smell it all. It's really.

Beautiful So what we want to do is get twoforks and then basically just pull apart that chicken. Can you see how tender that is? Thesweetness from the tomatoes and the onions with that spice of the smoked paprika, whichis such a great seasoning to have in your home. Get all the sticky bits from aroundthe edge of the tray and you can serve this in the middle of the table. So it's like beautifulorganised chaos. Now the only thing I love to do is just have a little bit of yoghurt,a nice little pinch maybe of the smoked paprika just to kind of give it a little bit of avibe. An optional extra as well, lemon or lime and that's it. Easy to put together,easy to cook and then easy to serve, and it's a real crowd-pleaser. For kids or adults,it's happy days. I love just to kind of line.

Up those sweet onions first, the gorgeouscrushed tomato and chicken, look at that. A sprinkle of the beautiful sweet corn anda little bit of that crunchy lettuce and just that kind of nice refreshment of a littlebit of yoghurt if you wish and if you want a squeeze of lime. Roll it up What I love about that is it's fun, but thejuiciness and the depth of flavour from the traybake is phenomenal. So guys, come on.Have a little cook up, you won't regret it. Enjoy