Tabasco, Coke, Beer – Will They Pie? 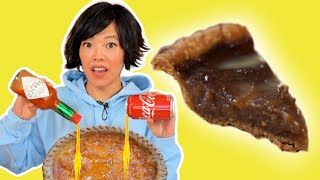 (light upbeat music) – Greetings, my beautiful lovelies. It’s Emmy. How are you? It’s great to see you. And welcome back. Today’s video is a follow-up to my Sprite pie. If you haven’t seen that video, I will put the link down below.

It’s where I take a can of Sprite and make it into a pie. It was inspired by a TikTok video, which seems to be inspiring a lot of things these days. And today, I’m going to be following up to see if I can use that same general recipe for a water pie, which is a depression era recipe for taking water and transforming it into a pie.

It’s one of those recipes that’s very resourceful and falls into the category of pies that were made with ingredients that were on hand. No milk, no problem. No eggs, no problem. You can still have pie.

And in the vein of a Rhett & Link video, I’m going to be substituting other ingredients for the water to see if it will pie. And I’m sure it will pie, but most importantly, what will it taste like? Alrighty.

So let’s go ahead and do this. I have four magical ingredients. They’re not all that magical. They were just ingredients I had around the house and I’m going to pie them. So, the first one I have is right in front of me.

Dun, da, da, da! Can you guess what this pie might contain? So it doesn’t smell too bad. It smells a lot like what the recycling might smell like after a New Year’s party, dun, dun, dun, any guesses? This, my lovelies, is a beer pie.

Instead of 12 ounces of water, I substituted 12 ounces of Narragansett Lager beer. This is a beer from Rhode Island. Isn’t this can cool? Circa 1975. Pour this into a store-bought pie shell. Over that, I sprinkled one cup of sugar combined with 1/4 cup of flour.

And then I added two teaspoons of vanilla extract and five tablespoons of butter that I cut into little thin pats. Baked it at 400 degrees for half an hour. Reduced the temperature to 375 and cooked it for additional 30 minutes.

Alrighty, let’s go ahead and cut into the, oh, I almost forgot to mention. Do you love this sweatshirt? So many of you requested a So Stinkin’ Cute shirt. Here it is. This is in the sweatshirt variety.

Okay, back to the beer pie. Let’s slice this, shall we? Look at that. All right. Okay, here we go. Itadakimasu. Mm. That’s not half bad. There is so much sugar in there and there’s a little bit of vanilla in there.

Mm. The filling is jelled and set. There’s a faint kind of beer-y, yeasty flavor, but pretty subtle. Mostly what I taste is butter, lots of sugar, and a little kiss of vanilla. Delicious? Wouldn’t go that far.

But it’s definitely palatable. Now a combination of butter, and sugar, and a little kiss of vanilla just automatically elicits dessert in your brain, just automatically. Yeah, not half bad. I’m so excited to taste it.

I almost forgot to wish you a Happy Thanksgiving. That is the reason why I’m making all these pies in the first place. My family and I are hunkering down. We’re having Thanksgiving just with ourselves but it doesn’t mean you can’t make a pie, right? Or make four pies.

(laughs) So here we are. So there’s the beer pie, not half bad. I think this did a great job in camouflaging the beer flavor. Granted, I did not use a beer that had a very strong flavor to it. If you were to use, say a really juicy, citrusy, hoppy beer, it would completely change this entirely but it might be fun to experiment.

Next, I have this pie, the dippy, dippity. Any guess what this might be. This, with it’s coagulated butter on top is a coffee pie. Now, this one I think will taste delicious. Instead of 12 ounces of water, I used 12 ounces of freshly brewed coffee and I went ahead and added the two teaspoons of vanilla ’cause I thought that would be a great compliment to the coffee.

One cup of sugar, 1/4 cup of flour sprinkled right on top. Bake this at 400 degrees for 30 minutes. Turn down the temperature to 375 and baked it for an additional 30 minutes. Brought this out, let it cool a bit and then place it in the refrigerator.

Now, I do have to say this top part is a little bit unappealing. The butter has coagulated on the top and solidified. So it has this kind of milky, yellow tinge to the top of it, but it’s butter, so it’s gonna taste good.

So let’s go ahead and cut this one. Ooh, that one set up beautifully. Look at that slice. Gorgeous. (jazz music) Mm. Mm, mm. Now, that one’s pretty good. The texture is soft and jellied. There’s plenty of sugar to balance out the bitterness in the coffee.

Mm-hmm, there’s a little bit of vanilla but you almost don’t taste the vanilla. But in combination with the coffee, it’s delicious. And when I say the texture is a bit jellied, it’s kind of similar to a pecan pie without the pecans, but not so syrupy both in texture and also in level of sweetness.

This one, I think is the most balanced in terms of level of sweetness of all the pies I’ve tried so far. I think the sugar is really nicely balanced with the bitterness inherent in the coffee. That is if you like coffee.

Next, we have this pie. Any guesses what this one might be? (laughs) This one actually came to me as I was falling asleep. Some of my best ideas come to me when I’m about to fall asleep, or when I’m waking up, or sometimes in the shower.

I think those are times where my mind is allowed to kind of relax and just ponder things. At any rate, you might think this might be a Fanta orange soda pie. No, this is not. This is a Tabasco pie. (laughs) So I made this with a half cup of Tabasco along with one cup of water.

Put that into my pie shell. Next, I added the vanilla because I really wanted it to incorporate with the hot sauce. Then I did the same thing with the sugar, one cup of sugar, 1/4 cup of flour sprinkled over the top.

And then five tablespoons of butter cut up and sliced on top. Bake this in a 400 degree oven for 30 minutes, reduce the temperature to 375 and baked it for an additional 30 minutes. Allowed it to cool.

And then refrigerated it completely. And this is what we have. Ooh. All right, this is the one I think I was anticipating the most because this one seemed so outlandish, but here we go. So quite shiny.

And here we go. Happy Thanksgiving. Wow! It’s sour. (laughs) And spicy. Yeah, half cup of Tabasco in a pie makes for a spicy one. So, because we added one cup of sugar, I thought this would be a lot sweeter.

But the first thing I taste it’s acid, it’s very acidic because the first ingredient I’m going to surmise in Tabasco is vinegar, it is. So this is a very tart pie, but definitely savory too. It’s salty as well.

I was very curious to see how the vanilla would affect this pie. Would it push it a little bit into the realm of dessert? No. The Tabasco definitely overpowers any hint of vanilla. It gets a little bit fiery in the back of your throat, which I kind of like.

It reminds me a little bit of Flamin’ Hot Cheetos. You get the kind of buttery, dairied richness because we put some butter on top of this, and you get the flaky crust down below. And then you’ve got this kind of vinegary hit, a little bit of fire, but not so much that you’re not off-put by it, and you don’t want another bite.

There’s sugar in there but you don’t detect it nearly as much as you would think. One cup of sugar was in this recipe but it’s more tangy and salty than sweet. So interesting. And even after I subjected the Tabasco into this pie form, you still clearly taste the Tabasco.

I think blindfolded, you would know that this would be Tabasco. It has such a distinctive, smoky chili flavor to it. Is it delicious? No. Is it horrible? No. Is this something I would want to make again? Probably not.

(laughs) There you have it. Tabasco pie. And for my last pie experiment, I have this. Any guesses what this might be? I think this one was probably the most requested in the comments of my Sprite pie.

This, my lovelies, is a Coca-Cola pie. Sprite, Coca-Cola, no-brainer right there. So same thing here. I poured a 12 ounce can of Coke cola into a store-bought pie crust. Added one cup of sugar along with 1/4 cup of flour.

And then I added one teaspoon of vanilla. I didn’t want to put two because I wanted to taste the Coca-Cola. And then on top of that, I added five tablespoons of butter sliced up into little bits. Baked it in a 400 degree oven for 30 minutes and then reduced the temperature to 375 degrees Fahrenheit and baked it for additional 30 minutes.

Let it cool on the counter for a little bit and then placed it in the refrigerator. And there you have it. A Coca-Cola pie. Ooh, ooh, ooh, break off. The filling actually turned out a little bit lighter in color than I expected.

Right, let’s give this a taste. Mm. I didn’t taste any cola at all. Gosh, is that sweet! So, so sweet. Huh, it’s kind of disappointing. I was really hoping I would taste some cola, particularly since I only added one teaspoon of vanilla.

I taste a bit of vanilla, but I don’t taste any Coke or cola flavor. I was expecting it to taste a bit like gummy cola candies but nope, don’t taste any cola at all. Now, I want this to be more vanilla, so it tastes more kind of like sugar cookie deliciousness rather than kind of umph, syrupy and very, very sweet and slightly flavored, but not that flavorful.

Alrighty, my lovelies, there you have it. The answer to the question you probably didn’t ask. Will it pie? Yes, it will pie. Will it taste good? That’s very debatable. Is it worth making? Yes. Just to embrace resourceful experimentation that is happening here, it is definitely worth making and fun to experiment.

I am so grateful to all of you. I’ve been doing this now for 10 years. I just celebrated my YouTube 10 year anniversary. Kind of blows my mind but it’s the truth and just, it’s such a gift. Thank you so much.

I hope you enjoyed that one. I hope you learned something. Please share this video with your friends. Follow me on social media, like this video, subscribe. And I shall see you in the next one. Toodle-oo.