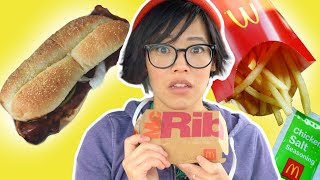 (upbeat music) – Greetings, my beautiful lovelies. It’s Emmy, how are you? It’s great to see you and welcome back. And as you can see, I am not in my usual space. I’m actually in my car. We are doing yet another one of these, Emmy-eats-through-the-drive-through.

Actually, I haven’t done one of these in a while, but today I’m going to be doing something that is another first. It is going to be the first time I’ve ever had a McRib Sandwich from McDonald’s. Have you heard of the McRib? So let me tell you a little bit about the McRib because I watched a short documentary about it on Weird History.

I’ll put a link down below to that. Absolutely fascinating 12 minutes of the McRib’s history. Now the McRib was created in 1981 by McDonald’s. And it has a very interesting history and we have two people in particular to thank for the McRib.

Roger Mandingo, who was the inventor of restructured meat. Restructured meat. Doesn’t that sound unappealing? Yes, it does sound very appealing, but it was a way to take trimmings or cast off bits of meat, meats that are less expensive, and process them through this grinding process.

Salt and water are added to bind it, and it makes this kind of meat paste that you can shape in all different kinds of patties, including chicken nuggets, you know dinosaur shapes, very even shapes. That is all thanks to Roger Mandingo’s invention of restructured meat.

Very, very fascinating that both McDonald’s and the U.S. military would be interested in this new type of meat. The other person we have to thank is Chef Arend, who was a French chef that was hired by Ray Kroc the owner of McDonald’s to do research and development for the McRib.

And it was made particularly in response to the U.S. government saying that red meat had a lot of cholesterol and that we should lower our intake. So, pork was introduced, the other white meat, in the 1980s.

In 1981, the McRib was brought to the masses. Now, Chef Arend thought it was really important that the McRib have the shape of ribs because this is restructured meat, after all. We need to make this slightly familiar and palatable.

So, let’s give it this riblet shape and then make it boneless, because there aren’t boneless pigs, after all, are there? Interesting, right? The McRib lived for about four years and then in 1985, it was taken off the menu to the protest of many, many people in the Midwest, in particular.

Apparently in other parts of the country, it wasn’t such a big deal, but it was brought back several times and then taken away several times. Interesting. At any rate, we are now in 2020 and I’ve never had a McRib before.

They just brought it back three days ago. So why not give it a taste? I got a McRib meal because I also want to try this. And this is McDonald’s chicken salt seasoning. And this comes all the way from Australia, thanks to Adam.

Adam, thank you so much for thinking of me, for sending this, and Aussies love their chicken salt on their chips or their fries. I’ve never heard of this before, nor have I ever tasted it. Adam says it’s essentially chicken bullion with a little bit of sweetness and it’s shaken on hot chips or fries and eaten.

I mean, it’s full of MSG, I’m sure. And I’m sure it’s going to be delicious. So I can’t wait to taste the chicken salt, so. Alrighty, here is the McRib sandwich in a longer box. Let’s open this up. There it is.

It’s kind of like a hot dog bun. It’s got a little crease in it. It’s got corn meal over it. I can smell the barbecue sauce and there is the inside. So there’s the McRib cutlet and indeed it’s shaped like ribs, but there are no bones in it.

It’s got three slices of pickle and some big raw onion pieces on it. That’s interesting. They’re not dehydrated onions which they normally top on their hamburgers. So on the rare occasion when I was a kid, and I ordered a happy meal and got chicken nuggets, I would always get the barbecue sauce and I haven’t had it in years.

So this is what this smells like. It actually smells really good. I like the smell of the pickles in combination with the barbecue sauce and the fresh sulfurous smell of the onions. Alrighty, here we go.

And the combination with pickles is great. The pickles have a nice crunch. They’re tangy. And then the fresh onion is really nice in there too. Huh. It does have a very homogenous consistency though. The meat is very soft.

Not only for texture, but for flavor. That bright pickle-y briny flavor and that fresh onion flavor are essential to me in this sandwich. Let’s wash that down with a little of water. Usually I get a Coke, but I’ve been having a lot of sugar lately and it gets me kind of spastic, so I’m already a spazz as it is, so let’s stick with water today.

Mhmm. It’s actually very similar to a meatball sub, but instead of marinara, you’ve got barbecue sauce and instead of balls, you’ve got patty, but essentially the same kind of concept. Alrighty, let’s go ahead and try the fries with chicken salt.

So, with our shaker fry bag, open it up, a medium fry. A lot of my fries fell in the bag, so put them in there. And then we’re going to take the chicken salt. It smells just like a ramen packet. Like a chicken Maruchan chicken flavor.

It smells exactly like that. Okay, I’m gonna put that in there. This reminds me that I’ve also had other McDonald’s, including Hawaii and Japan. All menu items I could find only in those locations. So I’ll put a link down below to those videos in case you are curious.

Okay I’m gonna fold this over. And we’re going to shake it. Here we go. (bag rustling) I’m gonna use my mic rib box so you can see the fries. Very evenly coated, I have to say. Nice. Chicken salt fries, here we go! Itadakimasu! Mhmm! It’s good.

And addictive. Just as I imagined. It tastes a little less like the ramen packets as I expected. It doesn’t have that signature kind of celery flavor, but it does have a chicken bullion-y flavor. And it’s a little bit sweet.

Definitely has some MSG in there. Mhmm. Which is so compelling. Why is MSG so compelling? I don’t know, but my taste buds and my brain says delicious. Eat another. Love it. Love MSG. This definitely has a chicken-y flavor.

It tastes like chicken powder. If you’ve ever had Knorr chicken powder before, it does taste like that. But it’s a little bit sweeter, just as Adam said. Salty, too. As if French fries needed more salt.

(Emmy chuckles) Mhmm. Alrighty, my beautiful lovelies. There you have it. My first taste of a McRib sandwich. If you’re in the mood for barbecue, I would say definitely get it. And chicken salt fries are equally delicious too.

A little bit salty. But very tasty. Alrighty, my beautiful lovelies. Thanks so much for tuning in. I hope you enjoyed that one. I hope you learned something. Please share this video with your friends.

Follow me on social media, like this video, subscribe and I shall see you in the next one. Toodaloo, take care. Bye! (fun upbeat music) (Emmy vocalizing) Gotta drink more water! (Emmy exhales loudly)