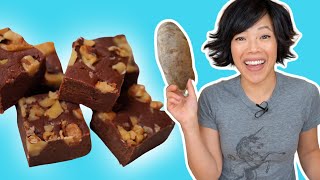 (festive music) – Greetings, my beautiful lovelies. It’s Emmy. How are you? It’s great to see you. And welcome back. Today, I’m going to be making mashed potato fudge. It’s post Thanksgiving. You might have a stockpile of leftover potatoes, so why not make them into a delectable dessert? Mashed potato fudge? The recipe I’m gonna be using today comes from Savuer, but it was adapted from Patty Pinner’s book, “Sweets”, and it was her Cud’n Bertise’s Mashed Potato Fudge.

So let’s go ahead and make this. So this will not be the first time I’ve made something sweet using potatoes. If you’ve missed my old fashioned potato candy video, I’ll put a link down below. So the first thing we’re going to need are some potatoes.

Now, if you have leftover mashed potatoes, they’re fine to use as long as they’re plain. You don’t want your dessert tasting like garlic or parsley or thyme. You just want plain mashed spuds. So I’ve got some potatoes that I cooked already and I’m going to go ahead and mash them using my favorite little gadget for that.

And it is this, and this is a potato ricer. So over to my right, I’ve got some water coming up to the boil, because we’re going to need that to melt our chocolate. Now back to the potatoes, I’m going to peel them.

You know, when I think of fudge, I think of chocolate. There are other kinds of fudges, but something really dense, not necessarily filled with shredded coconut. You know what I mean? Plop a potato into here.

And then we’ve got mashed potatoes, not a single lump. (Emmy grunts) (knife scraping) Half cup of mashed potato. And I’m gonna lightly pack that in. Over here, I’ve got some water coming up to a boil and we’re creating a double boiler situation.

We’re gonna melt our chocolate. In a large heatproof bowl, three ounces of unsweetened chocolate. This has no sugar in it whatsoever. Three ounces is about a quarter cup, half cup, about three quarters of a cup.

Four tablespoons of butter. And this should take about three to five minutes for everything to melt and get happy. This is melting beautifully. So the reason why we’re melting the chocolate over boiling water, rather than doing it right over at the stove top is that we don’t want the chocolate to burn.

Okay, turn this off. So we’re supposed to let this cool for just a few minutes. This is an eight inch brownie pan and we’re going to butter it so that the fudge comes out. To our butter and chocolate, half cup of mashed potato.

Boonk! Mush that in there. Ah, it’s smelling great. Two teaspoons of milk. An eighth of a teaspoon of salt. Salt is so important in desserts. One teaspoon of vanilla extract. One pound of powdered sugar.

One pound. That is a lot of powdered sugar, because powdered sugar tends to be so floofy and fluffy, it’s best to measure it by weight. But just to give you an idea, I’m gonna use a measuring cup. Begin with half a cup and stir this in.

This is why we used unsweetened chocolate. We’re gonna add plenty of sweetness. So after I incorporate this little blob in, I’m gonna go ahead and use the sifter here. One cup, one and a half cups. Two, two and a half.

Three. Okay, I’m gonna switch to my bread whisk. It’s starting to get pretty stiff. Uh oh, I forgot how many cups of sugar I’ve already added. I think that was three. Three and a half. It’s about four cups.

Work that all in, and that’s pretty much it. That is the chocolate fudge You can see why this bread whisk works so well for stiff batters and doughs, because the holes are so large, yet you still are able to mix everything together.

Except (beep) this and drive (beep) mad. Okay. Dump this into our pan. (fudge thuds) Press it in. This is looking delicious. And if you like, you can top this with chopped walnuts, little mini chocolate chips, and then you’re going to place this in the refrigerator for one hour to set up before we can cut into it and give it a taste.

So I decided to do half with walnut and half chocolate chip. I’m taking offset spatular, going around the perimeter. And I’m gonna cut this fudge into little cubes. Okay, carefully pull it out. There we go.

Don’t taste any potato, just chocolate, butter and tons and tons of sugar. Mm, and walnuts. And I like the walnuts in there. It kind of offsets that intense sweetness. It gives it a little bit more richness and it has that kind of textual component as well.

A little extra bite to kind of very sweet crumb. Okay. Let’s try the mini chocolate chip version. Mm hmm. That’s good too. So sweet. I think I actually prefer the walnut version, surprisingly. My child self I think would definitely have preferred the chocolate.

Again, adds a nice little bit of crunchy texture, like the walnut, but more sugar and more chocolate, which I don’t think this fudge actually needs. I think it actually needs to lighten up on the sugar, but it’s fudge.

Fudge is super, super, super sweet. And you have just tiny, tiny little bits just for that reason. Mm. Mhmm, mm. You know what it really reminds me of, it reminds me of a more solid version of an intense chocolate buttercream.

You have the powdered sugar, the chocolate and the butter in there, all in combination. But the texture is different. This is more solid. And like I said, more chalky and firm, but same flavor combination.

Just mashed potatoes, few ingredients, no dealing with hot sugar or anything like that. And you get fudge. Yeah. Alrighty, my lovelies. Thanks so much for tuning in. I hope you enjoyed that one. I hope you learned something.

Please share this video with your friends. Follow me on social media, like this video, subscribe and I shall see you in the next one. Toodaloo, Take care. Bye! (light upbeat music) (Emmy imitating nibbling)