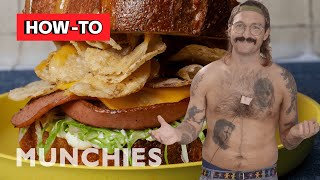 -Here we are shirtlessmaking this sandwich, it's just absolutely absurdthat we've made it this far and that I even consideredthat this was appropriate in any way to not wearmy shirt and do this. All right.Baloney sandwiches, I don't know,I think have a special place in like the American lunch,food pantheon. Hi, I am Mason Herefordand I am here at the Munchies Test Kitchen.We did three videos today,.

And we are hoping to changethe outfit between each video. And I only brought two shirts. So, that just explainswhere we're at now. I am going to cooka baloney sandwich, which is also the coverof my new cookbook “Turkey and the Wolf,Flavor Trippin' in New Orleans.” So, we're going to cut thisbread like over an inch thick. Ideally, you're able to buywhite bread from a baker so that you canslice it yourself.

And what that's going to do is give us the optionto have two textures, crispy and deliciouson the outside, but on the insidesort of steamed and chewy. Spread some butteronto our bread. I always recommendthat you have room-temperature butterat your house. It lasts longer thanyou think on your counter. So, one slice in,second slice good to go.

I didn't love baloney sandwichesgrowing up and I knew that I wantedto make a better version. It wasn't until I discoveredthe baloney made by my friends Leighann and Danat Piece of Meat butcher shop in New Orleansthat I knew that there was like just the baloney itselfcould be this good. It's totally different,it's ground meat and also cubed-up meatthat's been separately ground. It's all mixed togetherand it's smoked.

We're going to cut the baloneythree slices is what we doat the restaurant. And I'm going to fry thatin the same pan as the bread. We have a resting rack hereand that's for a reason. Right now, this bread is sortof soft and like almost floppy. And if I were to put mayonnaiseand baloney on this right now, it wouldn't really havewhat I like to refer to as the structural integrityto hold up those ingredients. But if you let the airflowaround it, it will crisp back up.

And then it will be likea nice crispy toast. But you'll still have a littlebit of that chew in the center which is why we cut the breadthe thickness that we did. A little bit more thoughtgoes into it than expected which is hilariousin my opinion. One thing that we have yet to dois cut our shredduce. Basically, shredduce is lettucethat's cut thin. We named it shredduce. We like to thinkthat we were the first to do it.

We also like to think thatthat was a clever idea. Baloney is going into the pan. You don't need to put anythingin the pan. There's a little residual waterfrom the toast but really there's fatin the baloney soaking on, I mean, it can go right in. We're going to meltsome American cheese on there, and then we are readyto make our sandwich. And I'm still somehownot wearing a fucking shirt.

All right. Baloney has beenin there for a minute. It's got some good color on it.I'm going to flip it over. I sort of overlap the baloney so there's not an open areain the center because you're going to glue ittogether with your American cheeseand you don't want that cheese to sort of meltthrough the center. I'm going to take the heat downto low, let that finish slowly. As you can see,our bread is rested,.

It's now crispierthan it was before, which is exactly what we want. So, we can start buildingour sandwich. We're going to do Duke'smayonnaise on one side and tease mustard on the other. We go liberal on our mustardand mayonnaise avocations. Three tipsfor making a sandwich. If I only had three tipsfor making a sandwich, they would be thinkof your bread.

As a component of the sandwich, not as just what you havein your pantry. Don't forget about texture. Sandwiches need texture justlike any other plate of food. And last but not least,wear a shirt. I don't know, I've only got two. The shredduce has goneon the mayonnaise side. We've decided as a teamat Turkey and the Wolf that it's very important.

That the lettuceis next to the mayonnaise. It just doesn't come offthe same if you have the mustard and then the lettuce together. The mayonnaise must touch thelettuce, it's just important. Try it both waysand you'll know. All right.Out of the pan, we are seared. Next up is the chips. We liketo do a very big pile of chips. I've been grabbing chipsfor a long time so I'm capable of grabbinga whole lot of ones.

That's going to go on top. You then perch the mustard-ladenslice of bread on top. Take a moment to admire, and then my personalfavorite part, the crunch-down. We don't serve it cut in halfat the restaurant so that the customerhas the chance to crunch it down themselves. I am going to cut this onein half because I like the ideaof possibly sharing it.

Because I'm not going to eatthe whole thing. And here we go,a baloney sandwich. I don't eat it every day but,no, it has not gotten old yet. Mm-hmm. All right. How –this is not going to work. Maybe if you could just tie itall around me. There you go. Yeah, I can use — there you go.Yeah, that was smart. Yeah, I wouldn't have thoughtabout going that like that. Yeah, it looks great.I'm feeling this, for sure.

-This is pretty. -I don't know whereyou're going to tie up. You don't need to.It's perfect. -No, it's perfect. [ Laughter ] ♪♪ -For the baloneysandwich recipe, click belowand you can find it there, or you can find itin my cookbook.