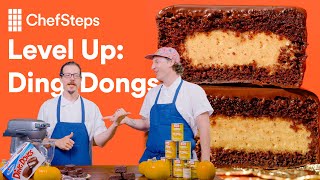 (gentle upbeat music) – Do youremember eating Ding Dongs as a child? – Yeah, I remember these wrappedin foil like that, right? We did this. Now, for some reason, they're in this plastic, which just doesn't holdthe same nostalgia for me. – So we are on a questto try to replicate this,.

Till it's light and fluffy. Then you add some eggs, and then you come inwith your dry mixture. So, let's get it going. Butter goes to the bottomof the mixing bowl. It needs to be soft. We're gonna add the brown sugar. I like to add the vanillaextract at this point with the butter and the sugar.

So it's important tosift your dry ingredients when making a cake batter. And so if you don't sift your flour, you're gonna end up withlittle chunks and lumps. All right, so the butter, sugar, and vanilla extract has been creaming for about five minutes. Now, we're gonna add the eggs. Room temperature eggs.

Gonna add them one at a time. – Why room temperature? – So if you put in a cold egg to this butter that we've creamed so nice, it will break and belittle chunks of butter. Drop in the last egg.(mixer whirring) This has been whipping for five minutes. Check it out. – You keep doing that so quick,.

I think it's gonnastart flying everywhere. – (laughs) And when it comes to creating that perfect emulsion, making cakes, you add this in three additions, just so you have a nice,smooth, even mixture. And everything is a fluid batter. We got our water boiling back there. That's the last addition,.

And the pumpkin areincorporated into the batter. – So why boiling hot water? Not just cold water or milk? – The boiling waterreally helps to hydrate and make a nice smooth batter emulsion. We're gonna start by going right down the sideof the bowl very slowly. Don't want to do this too fast. That's it.

Stop. – Looks pretty silky. – Okay, so we've got a9 by 13-inch cake pan. It's been sprayed andlined with parchment paper. Pour in your batter. – Make sure you leave alittle bit in the bowl for me to lick out, all right? – You can lick the spatula, dude. – Spatula? All right.

– And then we have a preheatedoven that's at 350 degrees. We're gonna bake this till it's done. About 35 minutes. (gentle music)(oven timer ringing) A freshly baked cake that has been cooled to room temperature is a lot easier to handleon the surface area. It's dry, it's not tacky. I use to let this sitovernight or in the fridge.

You can marry the filling with the cake and make a trifle, or cake balls. We're gonna trim these little cakes into two and a half-inch squares. – So why did youcut these in a square, instead of like the traditionalshape of the Ding Dong? – It's a little bitless fuss and less mess. And our cake is a little bit thicker than the classic Ding Dong.

Couple more bites thanyour regular Ding Dong. If you cut a Ding Dong open crossways, they actually inject thefilling in through the bottom with an injector. We're not gonna do that. What we're gonna do is we're gonna hollow out the cake and fill it from the top of the cake, which is gonna becomethe bottom of the cake.

And that gives us evenmore room for filling. Once you have the coins cut, then we're going to startby hollowing out these. And you're gonna gentlygo into each corner and gently pull. – So are you going inpast the ring on there? Or just going straight down? – Going in past the ring just a touch. – Oh, okay.

Part one of three is done. – Yeah. – Onto the filling. (gentle music continues) – So we're gonna make the pumpkin filling. We start off by making an Italianmeringue with brown sugar. We're gonna add some water, give it a little swizzle, and then we're gonna cook itto 244 degrees Fahrenheit.

So we've got a clean, dry bowl. Clean, dry whip. It's important that nofat comes in contact with the meringue, or it deflates. So I'm gonna go ahead andstart the egg whites whipping. (mixer whirring) We're gonna go right downthe side of the bowl. So we're gonna whip this.

Until it's cooled downto room temperature. You'll be able to touchthe side of the bowl. It'll be cool to touch. So next, we're gonna mixin all of our flavorings. Canned pumpkin, vanilla extract, salt to season it up, and then our pumpkin pie spice. (mixer whirring) And now we're whipping cream,.

And we're gonna fold the two together. A quick and easy way to do that is to take a little bit of this, whip it into the cream, and then take that creammixture and put it back. It's a form or a method of tempering. We're not gonna use all of it, but most of it. So we'll just fill the bag up.

I like to pipe right into the corner. That way you get it all the way filled. And don't fill it allthe way to the very top. Leave a little bit of room for the plug. This goes in the cooler tochill for about an hour. – All right, in the fridge we go. (gentle music continues) – Now, we're gonna makeour chocolate glaze. Three ingredients, one pot.

We've got a coating chocolate. The cool thing about coating chocolate is it doesn't require tempering. You can remelt it, strain it. You can use it over and over again. We're gonna make ittaste a little bit better with some dark chocolates. And then we're gonna add some coconut oil. I like to use the coconut fat.

Because it does set up a littlefirmer when it's chilled. The straining is just a precaution to make sure it's absolutely fluid. – At this point, you've got three recipes. We're just assembling 'eminto one thing now, right? – Yeah, let's do it. The ugly side is on the top here but when we dip it, let it drip just a little bit,.

It's gonna become the bottom. Once we get 'em all dipped, we're just gonna popit back into the cooler about five or 10 minutes. (gentle music continues) So we put our coat on, we put it in the cooler to chill, and you flip 'em over. You basically load up the top,.

And then start to work around the edge. Now go slow, and just follow yourcorners and your edges. Once you have that, you give it a little tap. And what that does is it willbreak up any air pockets, and it also evens out the topsto where it's not so thick. It is important that as you glaze, you're moving the cake just a little bit.

So it doesn't stick to the wire rack. If you want to add anygarnishes, sprinkles, you can add your own little flare to it. Pop 'em in the cooler. The glaze has to set fully. There we are. Better cake, fresherfilling, delicious chocolate. The Pumpkin Ding Dong. (gentle music ends).