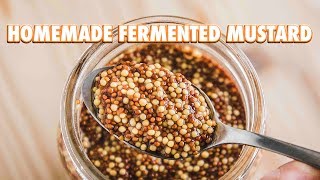 Because it really doesn't take that much more effort, it's just a little more waiting before it's ready, but you get so much more flavor out of it. But there's really not that much to say about it other than making it. So let's do that shall we? Super simple recipe here. So! In a one quart Mason jar you're gonna combine: 3/4 cup (143 grams) of yellow mustard seeds, and another 3/4 cup (143 grams) of brown mustard seeds. Then to that, you're going to add 1+(3/4) cup (or 425 ml) of filtered water… room temperature. Ya know it's okay if its cold, no big deal but ideally room temp.

Then you're gonna add a 1/4 cup (50 grams) of whey, and you know you can use whey from cheese making or you know you can add a little lemon juice to some milk, let it separate and filter out the whey. You can also can also completely leave out the whey. 1/4 cup (50 grams) of raw apple cider vinegar This is just going to (lower) the pH level of the liquid, just enough to keep any bad bacteria from doing their little thaangg in there. And it's gonna kinda help push the natural levels of good bacteria in there. And to that you're going to also add 3/4 Tbs (13 grams) of fine sea salt. (this is the real bad bacteria filter) Now optionally you can also add something called grains of paradise.

Which is a special kind of peppercorn if you can find them which is gonna be about 3/4 of a tsp (3 grams). crushed up in a mortar and pestle and then filtered through a fine mesh sieve or in this case, a nice little tea strainer… whatever you call this thing. You know what they are! It's useful…. okay? That's all I'm saying then just stir all that together, place a nice little cap on it. Don't make it too tight or else you might you know, make a little miniature bomb? we've talked about this before.

Uhh please don't do that. Just make sure its loose enough for gas to escape and also please label your ferments And then you're going to just let it sit for three days at room temperature now every day you're just going to give it a little stir, and just leave it out! Room temp! That's it. After three days give it a taste. If you want to go another day you totally can, but don't let it go more than three to four days Then just place it in your fridge and it'll be good for a very long time. I don't know how long because I've never seen this stuff go bad before.

And at that point that's actually, that's literally it. You have a whole grain mustard you can use for sandwiches, salad dressings, all that stuff… You can also blend this up in a blender with some liquid until it's as smooth as you want it. I know this is a quick one but it's been a crazy week and I still had to get this Fermentation Friday out to you all and as always, the B roll as well: *jazzy electronic swing music* Alright guys, that is it. So fermented mustard is surprisingly straightforward like with this you kinda open the gate to just about make any mustard you want.

Look, I had a long ass week Droppped my camera, it's still in the shop, Thank god for this guy Bobby, who saved my ass by sending me a Cannon 5D Mk4 to play with. All is well but it has been a long week so I'm going to cut it here *begs for subs* I will see you next week, which by the way *whispers* its gonna be a Ma sala chai video just so you knowwwww.