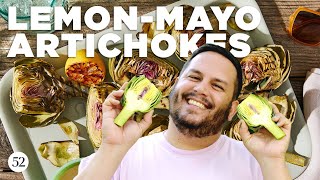 – Hi everyone, I'm Dan Pelosi. Welcome to my beautifulbackyard in Brooklyn. I'm so excited 'cause today, we're making my grilled artichokes with lemon mayo dipping sauce. Let's get started. They are truly one of the mostbeautiful vegetables we have. They can be a little bitintimidating to prepare, but I'm gonna give you theeasiest method possible.

We're going to start by just trimming about maybe an inch off the top just to get rid of therough leaves up here. So we wanna have a flat top. Look how gorgeous that is. You could, if you wanted to, clip off a little bit of thetop of each of these leaves, but I find that to be alittle bit unnecessary. The next thing I'll do.

Is I'll just remove anyleaves off the base. And then I'm gonna chopmaybe about a half an inch off the bottom just toclean that up and that's it before we just go aheadand slice it in half right down the middle to reveal just the most beautiful parts of nature. And I have a surprise for you. Are you ready? There's a little purple core on the inside.

And my shirt matches it. So, there you go. (giggles) This is the heart of the artichoke and these are all the leaves. We're gonna keep all of it intact before we go ahead and grill them. One thing I like to do while I do this is put the cut artichokes intoa bowl of lemony ice water. It just helps them tonot discolor for the time.

That they are sort of hanging out. I'm gonna get this lemon nice and juicy. Chop it in half, squeeze both halves intomy bowl of ice water. Now this ice water is great for before I prep the artichokes, but it's also great for after 'cause the next step I'm gonna do is I'm just gonna boil theartichokes for about 15 minutes.

Just to soften them upbefore they hit the grill. So I will take them outof the boiling water and also place themback into the ice water to stop them from cooking. I really think an artichokeis definitely something that is unexpected at a barbecue. So it makes me really happy when you can kind of surpriseand delight your guests. I'm gonna run inside,.

I'm gonna boil them in alittle bit of salty water for about 15 minutes. Take them out, put themback in the ice water bath, and then we'll get to grilling. So, I'll see you in a few minutes. I'm back. I've dried them off after giving them a nice little ice bath. I just wanna say again,so beautiful. (giggles).

We are going to brush these artichokes with some of this amazing Sir Kensington's Vegan Mayonnaise. This vegan mayonnaise has a really, really great lemony flavor to it. So when you add it to the artichokes and place them on the grill, it gives the artichokes even more flavor than they have naturally.

So, I just take a little bit of the mayo and just brush it on thecut side of the artichoke, making sure to get a little bitinto the part of the leaves. The second thing that's really amazing is that as soon as thishits the grill, the mayo, we're gonna ensure thatit gets even more brown and golden and crispy as it would if you just placed iton with nothing on it. So it really is just a win-win.

And makes a beautiful,beautiful grilled appetizer, side dish. Sir Kensington's Vegan Mayonnaise is made with aquafaba. Aquafaba is the liquid that is released when you cook chickpeas. The aquafaba replaces the egg that you would normallyfind in most mayonnaise. And I promise you, thisis the best foundation.

You could put on the faceof the artichoke. (giggles) She's gonna be so beautiful. I'm just gonna take a coupleof lemons, slice them in half. I love to grill halves oflemons face down on the grill to serve alongside the artichokes. All the flavors combinedis just so wonderful. Okay, it is time to getthese beauties on the grill. I'm gonna, again, put them mayo side down and these are going togrill for about 15 minutes.

I don't like to really move them 'cause I like them tojust stay down there, get nice and nice and crisp. You don't need to flip them over. They're already cooked througha bit because we boiled them and then I'm just gonnatake cut side down, place these lemons. These will also take 15 minutes. This is really, really low maintenance.

I'm just gonna plop thesehere, tell them we love them, and then close the grill. (giggles) While the artichokes and lemons get even more gorgeous on the grill, we're gonna throw together the easiest lemon mayo dipping sauce. So I'm gonna start with about a cup of the SirKensington's Vegan Mayo. We're gonna zest about half a lemon.

The Sir Kensington's Vegan Mayo already has some notes of lemon in it. This is one of those thingsthat you really can do less is more and then give it a taste and see if you wanna addmore of the lemon flavor. I'm gonna get this lemonready to be juiced. I'm gonna do, again, only halfof the lemon juice in here. I'm gonna add about a teaspoon of salt. And then my favorite addition.

Is about a teaspoon of paprika. You could use smokedpaprika, regular paprika. It gives this dipping saucea nice little layer of flavor and also gives it areally beautiful color. So, I'm gonna stir all that together. It's already so pretty. Feel free once you have thismixed to give it a little taste and then add whatever other bits of each of the ingredients you like.

Or maybe there's evensomething else you wanna add. But I thought this wasreally the perfect combo. And I mean, look at that color. It's just so pretty. Put those on this tray. Oh my gosh. Look at that. Oh boy, this is exciting. And I love to just takethese right off the grill.

And serve them warm. Make sure all your guestsare standing around waiting. Get these on here. And then we have ourgrilled lemons, let's see. Oh my gosh. Look at that. These make the lemons extra, extra juicy and give thema bit of that smoky flavor. So it's just such a win.

And again, it compliments allthe flavors that we've added to the artichokes with the vegan mayo. Look at this. Okay, so we've got all themayo giving you golden, glowing artichokes. We've got these grill markson the lemons, such a dream. Normally I would justlet my friends go ahead and attack this tray. They'll be gone in I promise minutes,.

But I'm gonna take one and plate it. I love to take a little bitof sea salt, put it on top. I squeeze a bit of thisgorgeous grilled lemon. And then, I'm going to graba leaf from around the side. These leaves have a nice chunkof meat at the end of them. This is the part that you wanna eat. So I'm gonna dip it into thevegan lemon mayo dipping sauce. And I'm gonna use my teeth tograb that meat off the leaf. Oh my gosh, these are so much fun to eat.

The notes of the lemonin the mayo are perfect. And of course, we've addeda little bit more zing with some lemon zest, a bit of paprika. It's just perfection. I hope that you'll make this recipe for your friends at home. If you need the recipe, it's at food52.com and I gotta go because I'martichoking up. (giggles) Bye.