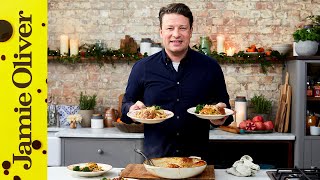 Here we got leftover turkey- white  meat, brown meat, stuffing, it’s all good. It’s gonna   make the most incredible stew, but then we’re gonna  make these biscuits, these dumplings that are so   good too.

So what I want you to do is just kind   of trim the ends and then that outer little piece  like that we can remove. Get the tip of your knife   and run it down the length of the leak like that  and then we can wash the leak under a tap.

I’m   going to just cut it in half and finally slice  it. Let’s do the second one. So what I want to do   is give it a nice generous pinch of black pepper  and then straight in with the leeks, and then i’m   going to turn the heat down to medium-low and I’ll  cook that for about 15 minutes.

So in a separate   pan let’s get that on to a medium-high heat, we’ll  start this amazing stew. So first up i’ll give it   some more olive oil, then we’re going to go in  with three bay leaves. We’ll go in with a couple   of sprigs of thyme and rosemary.

This will just  get the flavours going. Then I’ve got three onions-   roughly chop them, and then the second vegetable,  celery. Split them in half lengthwise and then   roughly slice them. In with the celery.

What we’re going to do now is let this   celery and onion cook down nice and sweet  for 15 minutes and the same on the leak. Okay, so 15 minutes later you can see  what’s happened, that’s cooked down   beautiful.

So first up i’m going to remove these  stalks of herbs. Then in here it’s really simple   to turn it into a beautiful, beautiful gravy. First  of all two heaped teaspoons of english mustard.   Then two heaped tablespoons of flour.

So we’ll stir  that through first of all and then what we can do   is put in one and a half litres of veg or chicken  stock. So get that, stir it in and we’ll bring that   to a boil. The sweet leeks and bacon now we can  just shake that onto a clean surface.

So just do   that and they’ll be cold easily within the time. So  as that comes to the boil you can see it beginning   to thicken up. I’ll turn that down now. We’ll  go in with the stuffing and the meat.

So almost  a little bit like a crumble topping and then   once you’ve done that we’re going to go in  with some beautiful buttermilk. So 125 mills    goes in at the same time as our lovely leeks and  bacon.

So they all become part of the same amazing   biscuit dumplings. We’re going to cook these lovely  dumplings on top of that stew so they’re going to   suck up a lot of that lovely gravy and just  kind of bring it together and if you come and   have a look at the consistency of this, it’s like  soft but it’s not sticky.

So this will go on here.   So wash me hands, pat it out with your hands  just take a cookie cutter, cut it out like that   and then we can then place those straight onto our  stew. Now this mess here is not a mess, this is all   good.

We can just simply push this back together  into a little ball, pat it down again to about two   centimetres thick, then we go again on top and we  won’t waste any of this mix. All I would do now is   just brush these dumplings with a little bit of  egg wash like that and then they go in the oven   for about half an hour at 200 degrees celsius  and then i’ll have a little clean down, we’ll do   some nice greens or broccoli or something  like that and that is going to be amazing.

So half an hour has passed, absolutely beautiful.  Hey look at that! You can see how everything’s   cooked into each other, it’s gone golden. So  let’s just portion some up. I’ll take some of   that lovely broccoli, go right in to the bottom  of the pan so you get a nice chunk of all those   lovely cuts of meat.

Come on guys, look at that!  That is proper comfort food at its best. Finish   it with a little bit of gravy, go on over the  biscuits, yes! Beautiful turkey stew with sweet   leeks, smoky bacon, biscuit dumplings.

Let’s  get on with a little bit of tasting. Yes. Oh my lord, that is a great festive leftover meal.  So that my friends is a thing of beauty. Comfort   food at its best. If you want this recipe and loads  more amazing recipes for the festive season then   check out my christmas cookbook, i’m really  proud of it, and there’s some great chapters.