Binging with Babish: Aunt Petunia’s Pudding from Harry Potter and the Chamber of Secrets 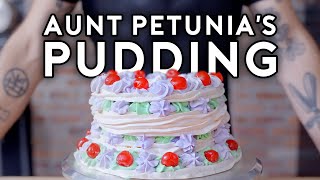 – This episode isbrought to you by Cash App. When personal finance connects you to both your funds andthe stuff that matters, that's money, and that's Cash App. You know what else is money? Really, really perfectcircles, nice dry cherries, and getting to drop acake on your boss's head. That's money. That's Cash App. Download Cash App from the App Store.

Or Google Play Storetoday to add your $Cashtag to the 80 million and counting. – It spread as far as the eye could see, all over the floor of this vast building, and it was this deep. And one plumber said,”Look at all that water,” a-and the second plumber said, “Yes, and that's just the top of it.” (tense music).

(fingers snap)(cake squelches) I'm so sorry. It's my nephew. He's very disturbed. – Hey, what's up, guys? Welcome back to “Binging withBabish,” where this week, we're taking a look atAunt Petunia's pudding from “Harry Potter andthe Chamber of Secrets,” which, to me, looks like a windtorte,.

Something that I saw on”Great British Baking Show.” So what we're talkingabout here is a layer cake made primarily of meringueand secured together with whipped cream, plussome maraschino cherries and what looked to me like apurple custard of some kind. I imagine this color andthe custard's flavor coming from some fussy old person'sliqueur, in this case, creme de cassis, a digestifmade from blackcurrants. So first up, the lengthieststep in our process:.

Making the meringue. For a French meringue, inthe bowl of a stand mixer go six large egg whites,which we're gonna help to stabilize with 1/2teaspoon of cream of tartar and flavor with 1/4teaspoon of vanilla extract. Go ahead and whip these guys together until they are light andfrothy, one to two minutes, and then begins theslow and steady process of adding the sugar,430 grams of the stuff,.

Added a little tiny bit at a time. Then all those sugargranules are gonna punch lots and lots of little holesinto the egg whites, I think, whipping it up, volumizing,and stiffening it as we continue to beat it together on high speed for four to five minutes until we have achieveda state of stiff peaks, just enough so that themeringue stands up on its own. Take great care not to over-whip.

Now I'm dumping the stuffinto two separate piping bags, one with a star tip, the other with a plainol' boring round tip. Then, on several sheetsof parchment paper, I am tracing out one nine-inchand three eight-inch circles, which I'm going to secure inplace on a rimmed baking sheet using a little bit of nonstick spray, insert my drawings face-down, and boom: nontoxic circle templates.

Now, the edges of eachmeringue disk looked like they were piped usinga star-shaped pastry tip. Then I'm flooding thecenter using the round tip, flattening it out, andpiping out one more ring on the outside of the top layer to act as a sort of custard barrier. So I'm ending up withone large base layer, two middle layers to hold thecustard, and one top layer. These guys are headed.

Into a preheated 225 degreeFahrenheit convection oven for 1 1/2 to 2 hours or untilthey are completely dry. Another one thing Ilearned from that episode of “Great British Breaking Show” is that you gotta let your meringues cool completely in the oven. Temperature shock causes cracks, and while even the best meringue is gonna have a few hairline fractures,.

You can prevent total collapse by waiting until your oven is cool to the touch. So there's the structuralbasises for our cake. Now we need to address the masonry. For the custard, I amcombining 90 grams of sugar with 30 grams of corn starch, tiny whisking until the cornstarch is evenly dispersed, and creating a slurrywith 100 mL of whole milk. Then, our remaining575 milliliters of milk.

Is being combined with 50 grams of sugar and one teaspoon of kosher salt, getting placed in a largesaucepan over medium-high heat, and being brought to a baresimmer, killing the heat, adding the remaining 50 grams of sugar to four large beaten eggs,whisking until combined, and then slowly streamingin the hot milk mixture, all while whiskingconstantly and impassionately to prevent curdling of the eggs.

Once the eggs are tempered,we're gonna return them back to the pan, placethem over medium-low heat, and bring them up to just barely a boil. Once you see littlepuffs of steam escaping from the little bubblesunderneath the foam, once again remove this from the heat, refresh your corn starch slurry, which probably settled a little bit, then, while whisking constantly,.

Slowly drizzle it inso as to prevent clumps and put it back over medium-low heat, once again while whisking constantly. Kendall says that in culinary school, they said that you're not making custard unless your shins are sweating. After one to two minutes,the custard should thicken. Take it off the heat, and then we can start letting it cool off.

While we flavor and color itwith this blackcurrant liqueur. This stuff tastes extraordinarily sweet and distinctly of dark, rich berries, so I'm hoping that it willlend its beautiful color and flavor to my custard, which it did not,because, as it turns out, when you mix purple andyellow, you get kinda gray. It tastes kinda good,but we're going to need to augment heavily with food coloring.

Until we get that slightlyoff-putting Aunt Petunia brand of purple, which we're gonna strain directly onto some plastic wrapset in a rimmed baking sheet to catch any curdled eggchunks, tuck it in for bed, and get it into the fridgefor at least two hours or until completely chilledand up to three days. Next and last may be my favoritepart of this pudding party. We're making whipped creamreinforced with cream cheese. We're starting off with two blocks.

Or 550 grams ofroom-temperature cream cheese that we're beating intoa consistent consistency. Then we're sifting in 200grams of powdered sugar, loving what high shutter speedsdo with suspended particles. Add 1/2 teaspoon each vanillaextract and kosher salt and beat together just like we would on any other creamcheese frosting Tuesday, scraping down the sides of the bowl to ensure even consistencyand then slowly streaming in.

675 milliliters of cold heavy cream. Once all the cream has been added, go ahead and continue beating until you've achieveda state of stiff peaks. And there you have it, folks: a frosting with theconsistency of whipped cream but the flavor of cream cheese frosting. Now, that's what I call wizardry. Sorry. Then I'm dividing this batch in half.

So I can color each greenand purple respectively, and then we're ready tostart doing one of the things that I am worst at: cakeassembly and decoration. We're starting with a dollop of frosting to keep our base layer in place. Then it looked like the first layer just had some greenfrosting holding it up, so I'm using that as a basefor our first custard layer, which, as you can seein the unfortunate way.

I'm squeezing it, makes itkind of like an alien autopsy. But once that's over with, I can fill the cavity with, (sighs) fill the waiting void, that's no better, uh, make a custard puddle,there, that's better, which I'm going to decorate with more green whipped cream frosting, top with another custardpuddle or cuddle for short, more structural green, and our top layer.

Now all there is left to do is imitate the many floral decorations, green and purple all around the cake or pavlova or windtorte iswhat it actually is, kind of. Last but not least, cherrieson the bottom and top levels, bottom on the green, top onalternating short purples. And there you have it:Aunt Petunia's pudding or a cake that looksfunny when it's dropped on somebody's head by virtue of magic.

First let's, ooh, see if we can manage to cut ourselves a piece. And how's it taste? It's okay, but it's way too sweet. Ultimately, this cakeonly has one purpose: sittin' and lookin' at, admiring the subtle artistryof your piping, and… Oh. What the devil? It's disappeared, almost as if by magic.

Or Google Play Storetoday to add your $Cashtag to the 80 million and counting. (upbeat music continues)