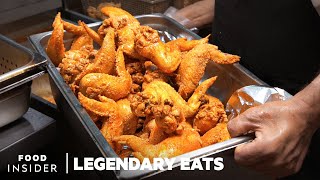 Taryn Varricchio: Chicken marinated in a secret blend of spices. Flour coated into every crease and flap of each breast and wing, dropped in oil and fried until all of the skin is perfectly crisp. Sweet waffle batter whisked until smooth and creamy, cooked to a golden brown color, remaining soft to the touch.

It’s the subtle sweetness of the waffle and the secret marinade of this savory chicken that makes Amy Ruth’s chicken and waffles a legend in New York. Fried chicken and waffles first appeared on menus at Wells Supper Club in Harlem back in the 1930s.

Although that restaurant has since closed, the dish never lost its hook on the people here. And much of that is thanks to Amy Ruth’s popularity. Customer: A lot of my friends, they go to Atlanta, and they’re like, “Oh, where’s the chicken and waffles?” I’m like, “That’s not a staple in the South.

It’s from Harlem.” Like, if they’re coming to Harlem, Amy Ruth’s is always the place to come for that. Taryn: The chicken at Amy Ruth’s starts with a secret blend of spices. Jannette Robinson: What we do is, in order to ensure that the chicken is flavorful and the season get time to evaporate to the bone, we preseason the chicken 24 hours in advance.

It’s like a rub. Taryn: Then Sister Jannette dredges the chicken in flour, making sure to cover each breast and the corners of the wings evenly. This ensures every bit gets crispy when it heads to the fryer.

The chicken usually fries for about 12 minutes, but the cooks will know it’s done when it floats all the way to the top. As for the signature sweet half of this dish, there’s Amy Ruth’s golden brown waffle.

Jannette: The key to the waffle is, so it won’t fill you up with gas, is to make it at least 24 hours in advance and let it expand in a 5-gallon container we put it in. Taryn: Is this sort of like when they tell you with pancake batter to let it sit before you make pancakes? Jannette: Yeah, same results.

It tastes better, and it’s better on your digestive system. It’s not struggling to digest, ’cause there’s no gas in it. Taryn: Typically, they make the batter in 60-pound batches in a 5-gallon bucket, but Sister Jannette agreed to show us herself by hand.

Jannette: How you cook is the key. Taryn: Yeah. Jannette: You got to cook with love. You got to time each ingredient that you put in, because you want it to have a desired fluffiness. Taryn: She whisks it until all the clumps are gone and the batter is totally smooth.

Jannette: See how it’s expanding? Taryn: Yeah, yeah. After it sits, it’s ready for the iron, where each scoop of batter cooks for about three minutes, until the waffle is soft with a golden brown color.

Dubbed the Rev. Al Sharpton on the menu, this plate is one of several tributes to famous Black figures you’ll find at Amy Ruth’s. And orders for that dish come through in the hundreds each week. Taryn: 2,000 a week pre-COVID, 500 currently.

You know, you’re not disappointed when you want something crunchy. They even give you the condiments, but you don’t even really have to use them, because the food is so delicious that you don’t want to mess with it.

Taryn: In 2017, The Daily Meal recognized the restaurant for serving the second-best chicken and waffles in the country. Jannette: Sometimes when I look out the little cubbyhole and look at the people when they receive their food, it’s like they’re in love.

Not like it’s a person, but it’s something that make them happy and give them joy. I guess they could say, “Let me go to Amy Ruth’s and get those chicken and waffles.” The enthusiasm makes me, makes me want to give more.

It’s always a hit. Taryn: Like the names on the menu, the tributes continue with paintings of prominent Black figures on the restaurant’s walls. And if you look close enough, you’ll find Sister Jannette up there with them, the soul behind the soul-food restaurant.

Jannette: I can’t be anything else but fun and kind and sweet and loving and caring. I grew up in the South on a farm. On a farm! Rough life. But a good life. And I grew up with 13 brothers and sisters.

Taryn: Wow. Jannette: And I am the seventh. And my mother says I was the most strangest one. I don’t know. Taryn: Your mom’s what? Jannette: Strangest one out of all the children. I said, “I think you mean to say unique,” when I was little.

She was like, “What do you know about unique?” I said, “That’s me.” Taryn: Yeah! Jannette: I mean, I’ve always been like this. I don’t know why. Taryn: It is so crispy. It’s like the flakes are flying off as I’m cutting in.

Producer: That sound is amazing. Taryn: The sound is amazing! It just makes you want to eat it. That is super different. That is not a typical waffle. I think there’s, like, a corn base in this waffle in some way.

I don’t — that is not confirmed. I’m totally just guessing. But there’s a sweet corn flavor. Jannette: You can’t just make it plain. Taryn: OK. Jannette: It’d be like everybody else’s. Taryn: Right! Like, I forgot I was eating a waffle for a second because I thought there was corn bread in my mouth, which sounds strange.

But, like, I got transported to a different food that I’ve experienced. And I think that’s because the flavors mimic that. Customer: I love the crispiness of the waffle, and then inside it’s just so soft and, like, decadent.

Like, it’s amazing. And then you put the syrup and butter, and it’s like, oh, my gosh, takes it to a whole new level. The chicken is crispy, then you got the tender meat inside. Oh, my gosh, so good. Taryn: This is great.

Like, I just want to just keep… normally I don’t take this many bites. I’m in it. I want — the skin is addicting. Like, you taste the crunchy, salty, crisp skin in your mouth. And you’re like, “OK, let’s just have more of that.

” Great dish overall. Like, I want to go back in the kitchen, talk to Sister Jannette, try to coerce her to tell me what she put in the waffle batter so I can make it at home. ‘Cause, like, that’s how much I’m enjoying this waffle more than other waffles I’ve had.

Customer: With all of the iconic cuisines that we have in this city, it’s nice that this type of cuisine is represented. And then people can come to the place where the people are cooking it and enjoy it in its home.